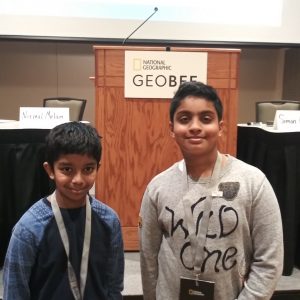 The National Geographic GeoBee is an annual competition designed to inspire and reward students in grades four through eight for their curiosity about the world. The GeoBee includes three levels of competition; school, state, and national.

School competitions took place in January. The winner from each participating school then took an online test to qualify for the state competition, only the top 100 scores advanced. Melam placed seventh and Kommana placed fourth at the State GeoBee.  Congratulations to both of these students for their accomplishment.